A few weeks ago, I decided to make a chowder for dinner. Aside from a Bear Creek soup mix, I've never really made soup before, and this was done almost entirely from scratch. I looked up two recipes online just to see how to start. One chowder recipe called for a roux, but I didn't feel like doing that. The other one called for chicken stock and heavy cream. I had already planned for something like that, so that's what I went with.

I peeled and diced the potatoes and put them in the corning ware pan with some melted butter, onion and garlic powders, and season salt. They went into the oven at 400 degrees for about a half hour. 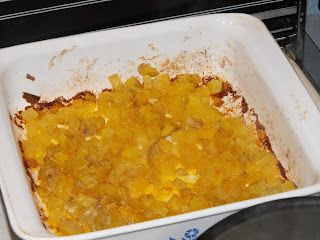 I could have just eaten the potatoes by themselves when they were done. Although, I did over season them a bit to stand alone.
In the large soup pot, I set the four cups of chicken broth to simmer with the dill, some fresh-ground pepper and the peeled and chopped carrots. 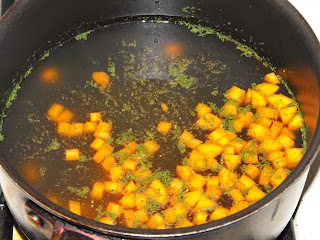 Nothing too exciting here.

In the frying pan, I sauteed the corn and onion in some leftover bacon grease. This came out really well too and I could have just had this as a side if I something else for dinner. 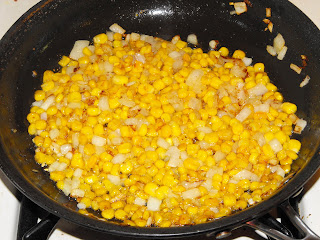 What isn't made better by being cooked in bacon grease?
Once the potatoes were done, I put them into the pot with the chicken stock, carrots, corn, onion, and various spices. Then I added a cup of heavy cream. I let it simmer a little longer. The butter that had been on the potatoes gave the chowder more of a yellow color than I had anticipated. The broth was also thinner than I had anticipated at this point, so I added about 2.5-3 tablespoons of flour. I whisked the flour in, adding it slowly so it didn't get all clumpy. 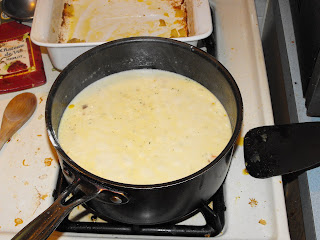 We're almost there. And please ignore the splatters on the stove.

I cut up the tilapia and imitation crab meat into chunks and added them to the soup. I let it simmer for about 15 minutes and then we were ready to serve. 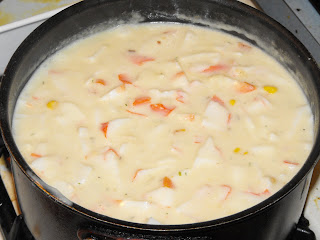 Mmmmmmmmm.
I served the soup with slices of Vienna bread that Logan picked out in the store. I let him choose between that and some French bread. 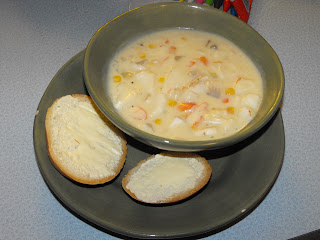 Everyone liked it. It was pretty similar to other chowder I've had before, so I must have done something right. If I do it again, there are a couple things I would do differently. I would have done something to the tilapia to take away some of the fishiness of it. I wasn't expecting it to be as fishy as it turned out to be. I also would have only added the imitation crab for the last five minutes or so. It softened up a lot more than I expected in the 15 minutes it was simmering with everything else, and I thought the consistency in the finished product should have been firmer.


Ava sat in her high chair and watched while I cooked. It's funny how she changes so much in a few weeks. These days, unless you're putting food in her mouth (pureed carrots tonight), she wont sit in the high chair for all that long without throwing a fit. She's just got to be the center of attention. Everything turned out to be a little much for her and she fell asleep mid-bottle while I was cooking. 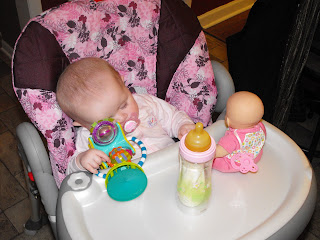 Aww, they're so cute when they're sleeping and not screaming.
Posted by mattw at 11:37 PM

2) OMGPONIES are Bear Creek soup mixes amazing or what? I mean, for soup mix?!?!?!