Today is my birthday, the 26th such anniversary of this day since I came into this world. This would make today my golden anniversary. I usally don't make a big deal about my birthday, so I had just a couple things I wanted to do today, sleep in and take it easy.


I woke up at about nine to the sound of the smoke detector, Logan screaming and large toys being thrown to the ground. Brandi had made breakfast. It was a lovely breakfast of scrambled eggs, toast and sausage. Apparently, the smoke from the sausage had activated the smoke detector since Brandi had forgotten to turn on the range hood to suck out the extra smoke. Logan, screamed upon hearing the smoke detector and began throwing some of his larger toys on the floor.


After breakfast we didn't do much. We did some light cleaning and I ran out to get everyone lunch. Then we put Logan down for a nap, where upon he didn't really sleep, and we did a little more cleaning before people came by. My parents, and Brandi's parents and grandparents came, as well as my brothers and their peoples. After much snacking on chips and dips and the like we did the presents thing. I got some books, a couple graphic novels, a couple shirts, a new game In a Pickle, a couple Wii games and an archery set (yippie!). I don't really know anything about archery, but I saw it in the store before we went camping and said it would be neat, so Brandi got it for me. 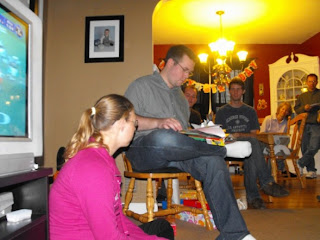 Then we had the cake and ice cream and pie. I'm more of a pie guy than a cake guy, so Brandi got me some apple pie. Afterward, everyone hung out for a while and people began to leave. We put Logan to bed early and then I ran out to get dinner, which was sushi from Benihana. I had the Philadelphia rolls and the spicy tuna. Brandi had Philadelphia rolls and California rolls. Now, we're watching Serenity and once that's over I've got to go bake a cake to bring to work. 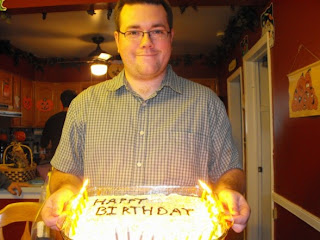 Hope everyone else had a good weekend! 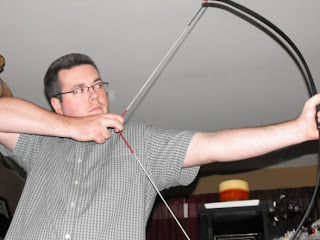 Update: I forgot to mention the part where Logan coughed so much that he threw up all the snacky stuff he'd been eating. That was fun, and it called for a wardrobe change.
Posted by mattw at 8:44 PM

Happy belated birthday, Matt! I'm sure you'll turn into a regular Robin Hood with some practice!

Oh man, I do not miss those days of cough, cough...puke!

Now I've only ever had sushi 2 places, NYC and, you know Japan. So tell me, just what in the world is a "Philadelphia Roll"? Cream cheese wrapped in seaweed? :D

Glad you had a good birthday.

Sounds like a great day, all except for the puking part of course.
Love the bow (something I have always wanted to do, but for some reason Keith doesn't think it would be a good idea?)

This would have been the second time in about 4 days that I was holding Logan in one arm and warm puke in the other hand.

John, a Philadelphia roll is cream cheese, smoked salmon and avacado. We've had sushi from a few places in the burbs and we both enjoy this kind. Although, there's a place in South Elgin that does it better than Benihana, IMO. It's too far to drive for $25 worth of sushi though.

I like the bow and figured out what it was when I saw the package wrapped. It's a 50-inch all fiberglass bow with a 25 pound pull. I really, really wanted to test it out in the yard yesterday, but having not shot a bow in a long, long time (an not being any good then) I didn't want the arrow to go wild and hit a neighbor's house. :)