My Mighty Mouse is Not so Mighty 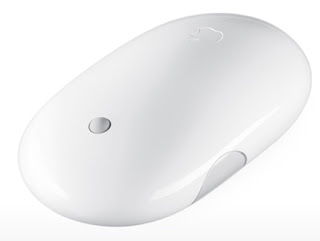 Here I come to save the day!
I have an Apple Mighty Mouse on my computer at work and the little scroll ball thingie is no longer functioning properly. It will scroll from side to side, but not up and down. I'm sure it's from use and the oils on my fingers getting in there and screwing up the mechanism. It's annoying, seeing as how the main reason I wanted it was for the scrolling capability. I don't know how to clean it out, if that is the problem, or how to fix it, it that's the problem. The IT guy at work has no idea either? Does anyone out there know, or is it a lost cause?
Posted by mattw at 3:27 PM

Matt, check out this video:

It's a very smart kid demonstrating a fix that appears to work for a lot of people.

Mine has that problem at present too; it's common (and you'd think Apple might've known it'd be an issue, given what happens to ball mice - and the fact that their balls can be removed and etc.). My quick fix is to turn it upside down, rub the ball all over with methanol while rolling it around, then drying it with lint-free cloth (or a swiffer). There are also detailed instructions (with pictures) floating around somewhere on the Internet showing how to do major surgery to get it cleaned out. But I'm not that brave. ;)

I'll have to check out that video...

Ah, yes. Exactly that, except with methanol. :) I even have a stash of qtips expressly for the purpose.

Thanks Vince and MWT. I tried that method with water and alcohol after watching the video and that didn't solve the problem. Ah well. I never thought to check youtube for the answer, so I'll keep rooting around.

Yeah, I dropped mine on the ground, completely breaking the crap out of it. Before that I had the same issues.

I replaced it with a Logitech bluetooth mouse that got great reviews. It sucks. I miss the responsiveness of my wireless Mighty Mouse, even if I don't miss the stupid ball thingy.

No problem Shawn, I do plenty of whining around here myself. :)

Matt, Keith also has the same problem, although right now his is intermittent. Mine has an actual wheel, so I don't run into as many problems. This appears to be a really common problem..and you would think that Apple would do something to fix it. Although it does keep us buying more mice, so maybe that is the plan all along.

Well, you don't even need the alcohol, just take a damp soft cloth (low linting), turn the mouse over and vigorously roll the ball with the cloth (this is actually Apple's recommended maintenance). If you like you can also try to blow air (can, or some of us used to play tuba) from the underside. I've rehabilitated two mice this way.

Yeps, I loves me my Mighty Mouses.

Does this tape trick work for you?

If not, are you brave enough for surgery? ;)

Steve, thanks for the tip.

MWT, I might give that tape trick a shot, but since it's company equipment I probably wont be attempting surgery. :)