I actually made this on Sunday, but haven't gotten around to blogging about it until today. It seems that Sundays have become the day to play in the kitchen if I'm not working. Two months ago when I went grocery shopping I bought some stew meat, not knowing exactly what I would do with it, but wanting to do something with it. Saturday night we were looking throught the cook books and couldn't find anything that we wanted to try, and then Brandi remembered a recipe she'd seen on a mommy message board she's on. It sounded good, so we decided to go with that. It didn't have a name, but here's the recipe:
1 cup beef broth or red wine (we used a 2002 Merlot)
2 pounds stew meat
1 package onion soup mix
1 can cream of mushroom soup
chopped mushrooms (optional)

Put in the crock pot and cook on low for eight hours. Just before serving, stir in a 1/4 cup to a 1/2 cup of sour cream. 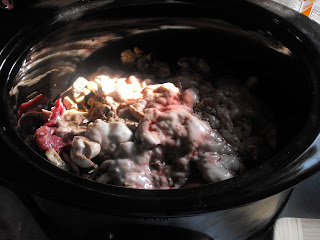 Here it is before cooking. It kind of looked like brains. Mmmmmmm brainzzzzzzz. 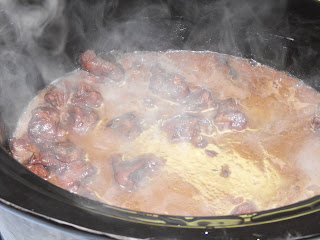 Here it is after cooking for eight hours, but before the sour cream was added. 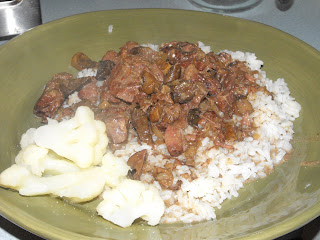 It was served over rice with some cauliflower.

It was quite tasty, if a bit winey, when it was done, and the rice soaked up much of the extra sauce. The meat was extremely tender after simmering for so long and the house was filled with the aroma of it cooking all day, which was pleasent. I'd definitely make it again.
Posted by mattw at 9:05 PM

Looks like I need to break out the crock pot. That looks good.

Strangely enough, crock pot is a perfect solution for our busy lifes. However, we have abandoned it.

On average we use the crock pot once every one to two weeks, but I'd like to use it more. That would require more planning on my part though.