Unless you’ve been living under a rock, you’re probably aware of the havok and destruction that Hurricane Ike caused not only in Texas and the Gulf Coast, but strangely in the Midwest as well. Then again, if you’ve been living under a rock in the Gulf Coast, Texas or the Midwest, after last weekend you’re probably no longer alive to give a rat’s ass about what happened.

In case you don’t know, we live in Des Plaines, flood capital of the Midwest. We got at least five inches of rain between last Friday night and Saturday morning and then it rained nearly all day Saturday and all day Sunday. We got water in the basement, which we knew was going to happen, so it wasn’t a big deal. I think that house gets at least a little water every year. During the Great Flood of ‘07 not only was there water in the basement, but a branch fell across the power, cable and phone lines, which are all conveniently located in the same area. We hadn’t moved in yet, but we did have some stuff there. A neighbor two houses down generously ran an extension cable to the house so my father-in-law could alternately run his sump pump and refrigerator.

Since our basement floor has it’s low spots, we had anywhere from two to four inches of rain water down there. The water is out now, but the clean up continues. I was at work all day Saturday, so I didn’t get to witness the awesome force of the storm outside our house, but Brandi did take some pictures.

Unfortunately, she didn’t get any pictures of the back yard that turned into a small lake. Now you can see the water’s peak back there because of the line of wood chips that was washed out of our gardens and into the yard. Our neighbor had it even worse, and on Sunday I could see a whole chain of lakes starting in his yard and going to consecutive yards behind his. I was over by his house last night, and while the back yard isn’t showing standing water any more, it’s still muddy and stinks.

The water level was building on the streets when I left for work at 8:30 and had gone back down by the time I got home at 6:00. There were several roads closed on the way home, so I had to find my way around all the flood water. Had I tried to go to work a couple hours later, there would have been no way I would have made it off of the driveway. 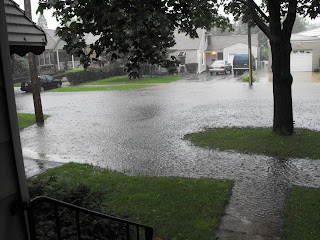 The skirt of our driveway where it goes to the street is under there somewhere. Also, I like the island look around the trees. 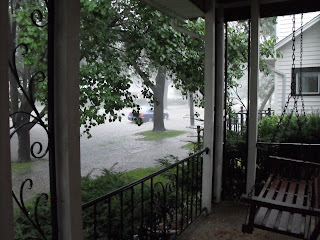 At some point our neighbor standing in what was left of his yard, yelling at passing cars to slow the fuck down because they were putting waves in his living room.

We’re about four blocks from the Des Plaines River, as the crow flies. The river came up quite a bit over the weekend, which was the cause of most of the road closures around us. On Sunday when we were getting ready to leave for Michigan, we stopped to get gas at a station that is about two and a half blocks from the river. The water level at that time was up to the intersection where the gas station was located, and according to my father-in-law, the river came up another 20 feet on Sunday. Wowsers.

The house that my parents live in and that I grew up in is almost at the top of a large hill, so we would get very minimal water in the basement, if any during such a storm. If they get any, it might be a large puddle near the sump pump. Needless, to say, I didn’t realize how much the water would come up.

This is from the Chicago Tribune “In Des Plaines, where nearly 2,500 homes and buildings were affected by the weekend’s torrential rain...”

And this is from the Des Plaines Times “The river was at 9.32 feet as of 5:45 p.m. Monday, according to the National Weather Service’s report. The waters had crested at 10.01 feet at 10:30 p.m. Sunday, and were expected to fall below flood stage by 6 a.m. Wednesday.”

I heard on some news program that this was the most rain the Midwest has had in 24 or 48 hours since they started recording rain howevermany years ago. Was this the worst flood that Des Plaines has ever had? No, at least not according to Brandi who remembers someone canoeing down our street during the Great Flood of ‘87 or ‘88.

One of the most surprising things that we saw from the news was at Indiana Beach (only an hour or so from us), where the floodwaters washed out the sand underneath the main parking lot, and the lot then collapsed into the 10-foot-deep sink hole that was left. I don’t remember how much sand was washed into Lake Michigan, but it was a lot. 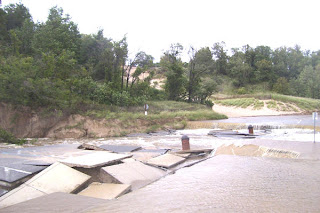 Uh, honey, do you remember where we parked? This doesn't look like it at all.
This is from the Chesterton Tribune: “The main beach parking lot at Indiana Dunes State Park, what’s left of it, is swamped by rushing floodwaters on Sunday after collapsing into rubble when the sand beneath was washed out and washed away by the flooding of Dunes Creek.”

So there you have it. A fun little experience in the Flood Capital of the Midwest. Will it happen again? I’m sure it will. Will we be ready for it? As ready as we can be. Maybe before next summer I can put the house on stilts and we’ll be able to stand above it all and laugh.
Posted by mattw at 11:27 AM