A Typical Trip to the Park

Here is a brief summation (with photos!) of a typical trip to the park with Logan. The trips last anywhere from 10 minutes to an hour, but are usually shorter rather than longer.

After playing outside for a little while (or sometimes not), Logan decides when he's ready to go to the park. Of course, that's the time that we go, excepting sometimes when dinner needs to be made or something else is going on. 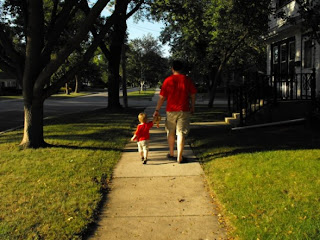 Daddy, it's time to go to the park now.
When going to the park, there are certain items we need to take with us. They are: 1) Duckie 2) a toy car (although this one is not always necessary) 3) water/juice, which Logan doesn't ever think to bring, but we do, because he usually ends up wanting it when we get there.

Once we arrive at the park, Logan might run around for a while, he might get up on the equipment a little bit. He used to like the swings, but not so much anymore. We think it's a terrible twos assertion of freedom of movement thing, that he can't be stuck in the swing. Recently we've gone down to the park and after he's done running around for a while, he'll play with his car at the picnic table. 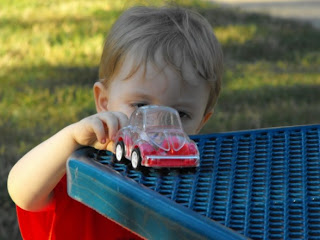 I know we have a picnic table at home I could do this at, but this one is different.
Then, when Logan is ready, and usually not before, we will head home. He'll decide this by starting to walk back home. It's amazing how within about four trips to the park he knew just where to go to get from home to the park and back. It's just down the street, but it's on the other side of the street and three or four blocks away. I'd send him on his own (he's indepent and doesn't want us to hold his hand right now), but the darn kid seems to think he can run into the street and the cars will just bounce off him or something. 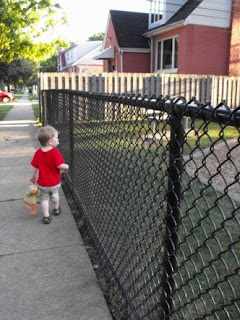 Ok, I'm done, you may follow me home now.

And of course, going to the park is very serious business. We don't mess around with the park. 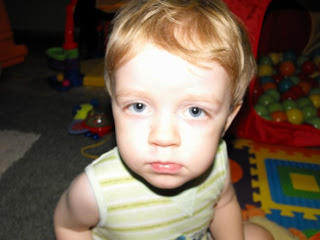 Daddy, I'm always serious about the park. Now stop blogging so we can go.
All photos taken by Brandi, who has much more skill in this area than I do.
Posted by mattw at 12:23 PM

I'm happy to have been on one of these trips to the park.