Squirrels seem to be the topic of the day among the UCF today. I believe it all started with Jim's photo of the tree rat fattening itself up for winter. And I guess it blossomed from there. Then, it happens to be that most celebrated of holidays, "Make Nathan Dance Like a Monkey Day" and I made one simple request for a squirrel in a cowboy hat riding a rooster with a saddle on. What did I get, a video of a kid having no fun riding a motorized squirrel thing at a zoo, which he was probably put up to by his mom and his great aunt Mildred or something like that. So for those of you that have never seen one in person before (and they are magnificent) I give you, Cowboy Squirrel Riding Rooster. 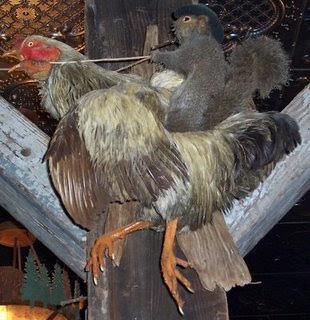 "What'cha lookin' at?" the tired-looking grey squirrel chittered at the nosy barman.

"You're one of them folks from the other park, ain't'cher? One of them's that were part of the great drive west, who staggered in yesterday on foot because you had to eat your mounts when ya got snowed in for the winter. You are, ain't'cher, I can tell."

"Is what true?" Whiskers barked.

"What do ya think, ya dumb hick?" the irritated squirrel replied, slamming his hat down on his head with a swipe of his paw as he made to storm out. "It tasted like chicken."

Eric, that is awesome.