So today we had my wife's birthday party (as the resident UCF whippersnapper I wont say how old she is so I don't get any more flack about being young). I've been working my ass off for the last two days to make sure everything went right for her and everyone had a good time. There was a secondary reason to the party that I hinted at a couple days ago. I have great news to share, but Logan said it best, so I'll let him explain. 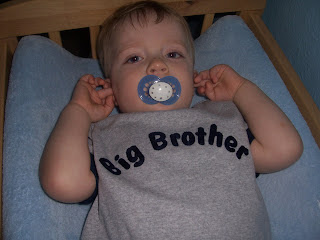 We found out two weeks ago and my wife wanted to use her party as the occasion to let everyone know. After she changed him into that shirt, it took a while for anyone to see because he wanted me to hold him, and of course his shirt was blocked by his oafish father and Logan's duck. We're very excited. So far, everything seems to be going ok. We had some worries last week, but things seem to be all good now. We're going to the doctor in a few weeks for the first ultrasound. She's due in March (around the 13th). We'll see how many more gray hairs I have by then.

Everyone was in attendance to get the news, except my parents because they decided to go out of town this week. Too bad for them.

We've been talking about when we'd try to have number two, and we're so happy that it's here. I love Brandi so much, and am glad that we are growing our family.

I would say that I need to start storing up on my sleep now, but with Logan around, that's not going to be possible this time.

Interestingly enough, I have another blog friend with a 2 year old named Logan who's going to be a big brother soon. :) Her name is Tanya though.

I wish you lots of joy!

Oh that is so wonderful to hear!!!!
Congratulations to all of you..and i wish you all of the best (and stock up on the sleep now...you are gonna need it!)

That's fantastic news! I'm very happy for you and your family, Matt. Congratulations!

Congratulations Matt and Brandi! That is indeed great news. My best to you both, and good luck on that stocking-up-on-sleep thing.

Go, family! Congrats, and keep us apprised of progress!

Thanks everybody! I'm starting to get reaquainted with the things I had forgotten from the first time, i.e. the voracious hunger, the mood swings... It's a blast.