We’ve all seen that loveable Disney/Pixar movie Toy Story. Tom Hanks, Tim Allen and others lend their voices to one of my favorite Pixar movies, which has now become my son’s favorite movie. I don’t know what it is about that movie to his 21-month-old brain, but he enjoys both Toy Story movies more than anything else he’s seen yet. Of course, he hasn’t been introduced to Star Wars yet, but that will come eventually. But I’m getting off topic.

What bothers me about Toy Story and Toy Story 2 when I watch it is one question: Where’s Andy’s father? 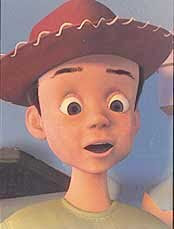 In both movies, the mother is present with a supporting role and has a definite influence on Andy’s life. Not once in the movie do we see Andy’s father, no reference to him is made, there are no photos that I’ve seen with the happy family. One would have to figure that Andy knew his dad for at least a few years of his life since he has a baby sister that is a few years younger than him. Unless, of course, Andy’s sister is the offspring of another man, but then where is the second father if that is the case. And what does this say about Andy’s mom and the values she is teaching her children.

So why the oversight Pixar? Do you not value the role of a father in the raising of a child? Research shows that a father’s role is very important in the life of a child. Did you not have healthy relationships or any relationships with your fathers? If so, I am sorry that was the life you grew up with.

I know they’re just children’s movies, but I would like some kind of an explanation. I think this leaves a gaping hole in the lives of these two fictitious children. To try and fill in the story, I have come up with some possible explanations as to what may or may not have happened to Andy’s dad: 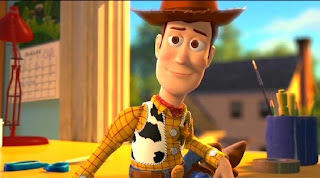 ~Andy’s parents got divorced (for whatever reason, fill in the blank) and Andy’s father does not have any custody or visitation rights.

~Andy’s father was a police officer that was killed in the line of duty. This may explain Andy’s attachment to Sheriff Woody, and later Buzz Lightyear, possibly as a replacement father figure.

~Andy’s father “ran out for a pack of smokes” and never came back. Woody was a cherished toy that Andy had been given by his father and clings to it like he clings to the hope of his father’s return.

~Andy and his sister are the products of immaculate conception.

~In a Hand That Rocks the Cradle kind of scenario, Andy’s mom stole Andy away from his real family and made up some bogus story about his father’s whereabouts. The same would apply to Andy’s sister.

~Andy’s father is a Willy Wonka-esque toy maker who is too career focused to have time for a family and he sends toys out to the two children.

~The spirit of Andy’s father was trapped inside the Sheriff Woody doll and that is why the two are so attached.

Or maybe, I’m just thinking about all of this too much.
Posted by mattw at 12:11 PM

Congrats on the new incubation! (I just left the women's center, where they have 2 c-sections scheduled today, and 4 babies trying to show up. Babies everywhere)

I like the I like the possessed doll idea, ala Chucky. But that could be me, because I also like the kidnapping scenario. It gives a Disney picture a whole new depth and twistiness, especially considering the premise of TS2, when the toys are stolen. Dramatic irony?

The vast majority of movies and TV shows devalue fathers. I'm not sure why, but I find it very annoying.

Thanks Tania! I like the Andy's dad was a lawman killed in the line of duty angle myself, that seems to explain things satisfactorilly.

Vince, yeah, that's really annoying. Coincidentially, I just saw the end of an episode of Quantum Leap the other day where Sam had to fight for custody of his father even though he wasn't the best conventional choice.

Ithink it's actually very positive and brave that Andy's father is absent in Toy Story. It shows that not all families have two parents present and sends a positive message that you can still be a secure family unit if only one parent is present.
I don't think Disney films devalue fathers at all, take for example in Finding Nemo when Nemo's mother is killed in the opening scence or in Ratouille wheere there is mention of a mother.
So i think it's very equal and after all it's just a movie!

We don't talk about Andy's father. And if he tries to come around Andy ever again when he gets out, Mommy is buying a gun. We clear?

So are you saying that Andy's father is Tyler Durden?