Our Weekend at The Farm 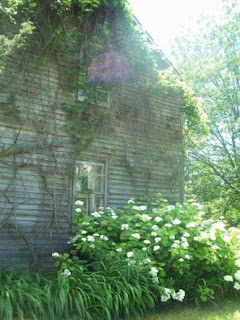 The old house, they say it's haunted. I've heard stories.

So last weekend we went to The Farm, as we usually do for fourth of July. Since my lovely wife and I started going out, there's only been three times we haven't been to The Farm for the fourth. 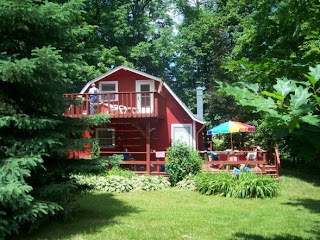 The new house. Grandpa is busy at work slapping on a fresh coat of paint.

For those of you who don't know about The Farm, here's a brief rundown. It's somewhere in the neighborhood of 32 acres of farmland and woods purchased by Brandi's grandparents about 40 years ago after seeing a friends similar getaway. It's located in Blue River, WI and there's a good quarter mile at least to the next driveway. When her grandparents bought it, there was a barn and a house dating back to the civil war. The barn is still in pretty good shape. The house...well we're just waiting for that to fall over. Her father built a house up there which is what we stay in now. There isn't a whole lot to do up there, which suits me just fine. There's always something they're doing to the house i.e. putting on a new deck, which can be very satisfying work, but all in all it's pretty relaxing. 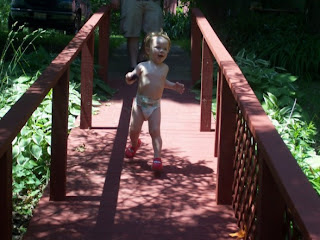 Clothes only increase friction and slow him down.

However, this year, the relaxation factor went down quite a bit. You see, it was Logan's first time at The Farm, and while he had a perfectly wonderful time, it was less fun for us. He enjoyed running up and down the bridge from the barn to the house (the house is at the bottom of a couple hills and I helped build the bridge up the the barn a few summers ago), he enjoyed climbing around in Brandi's grandfather's van, he enjoyed playing with the dog, etc. etc. He didn't enjoy his normal sleep schedule, which made him cranky. We couldn't put him in his playpen to sleep, because the first night we were up there he discovered he's now tall enough to climb out. So, from then on, I would have to lay down next to him to get him to go to sleep. 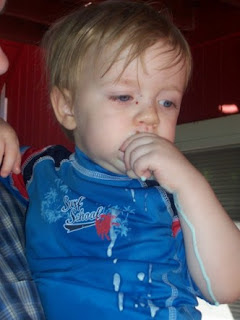 Everyone but daddy got ice cream. Poor daddy.
He also wanted me around all weekend and didn't really want anyone else, which is flattering, but when you want a few minutes to yourself to read a few pages or whatever, that kind of gets in the way. So Brandi got to relax, I was less fortunate. Also, because of the lack of sleep (the boy went to sleep at about 8 each night and woke up at about 5:30 every morning. Usually he'll sleep from 7:30 to 7:30.) he was a cranky boy when he didn't get his way. We also had to worry about him falling while he was running up and down the deck and elsewhere so he didn't hurt hisself. He did fall a couple times, which really wasn't a big deal, but he made it sound like one. He also fell once on the gravel driveway and scraped up his chin and got a mouthful of gravel. 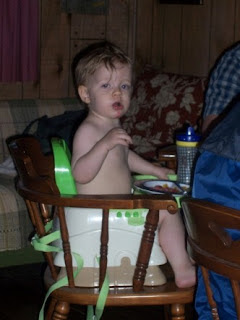 No shoes, no shirt, no pants, lets eat!

Usually we'll go to Boscobel for the fireworks, but we didn't get to go this year. By the time I got Logan to fall asleep, it was nearly dark and we wouldn't have been able to make it in time. We didn't want to take him, because last year, he didn't care for the fireworks at all, and we were a good distance away from them. We did light a handful off on Saturday night by the house after Logan was asleep. It was satisfyingly loud, and the great clouds of smoke kept the bugs away. 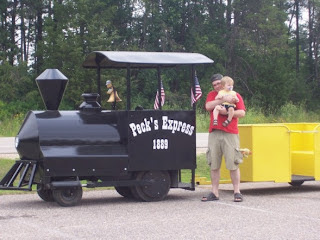 The train was really exciting for Logan...until we took a ride.

We came home on Sunday, stopping at Peck's on the way home. Peck's is a little farmers market kind of thing with a petting zoo. In the last couple years they've really redone it to make it even more family friendly. There's now a playground, giant sandbox, haunted house, maze, and a (mock)train ride. We took Logan on the pseudo train because he loves trains. He loved the ride for about the first minute of the ten minute ride. After that, he screamed and wanted to jump off. I had to hold him down. Aren't kids fun? He's just lucky he's so dang cute. 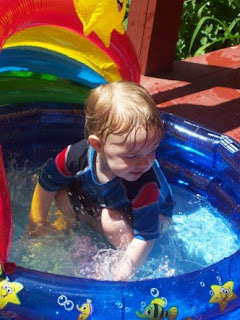 Brandi got to feed her new addiction while we were at Peck's too. We went looking for black popcorn, and we found it. The kernels are black on the outside and they pop white just like any other popcorn. The flavor is a little different, better than regular I think, but they don't seem to pop as large as your typical Orval Redenbacher. They also had a mix of different kinds of kernels, a rainbow variety, regular, mushroom cap (which pops round and is generally what caramel corn is made with), red and a mix. I think Brandi bought about five pounds worth. 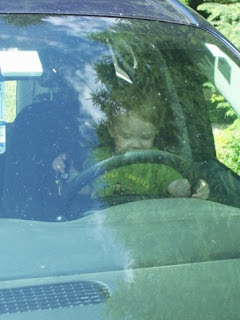 Next year, Logan can drive.

Then it was off to home and the rest of the drive was pretty smooth sailing, until we got back into Illinois, where no road is safe from summer construction.
Posted by mattw at 8:06 AM

Poor Daddy. Maybe next year you can relax on vacation.

Always good to have a sympathetic spouse :-).

Vince - Yeah, she's real sympathetic. The Farm is a wonderful place with many fun stories.