The Wii Fit is a Cold-Hearted Bastard

I think I’ve mentioned this before, but for Christmas we got a Wii Fit from my mother-in-law. This accompaniment to the Wii consists of the game software and this incredibly sophisticated little platform that can measure your weight and even the minutest shifts in your center of balance. There are a variety of “games” that fall into four categories: balance, strength training, yoga and aerobics.

When you create your account on the “game” it asks for your age and height, and then it weighs you and gives you a couple of balance tests to tell you what your Wii Fit “age” is. Your Wii Fit age is your body’s approximate age according to your actual age and how well your body responds to the balance and coordination games it gives you. I think the first time we used it, it told me I was 54.

The game also tells you, based on height and weight, your BMI and lets you know if you’re “underweight,” “normal,” “overweight” or “obese.” The I fall into the last category, unfortunately. It also adjusts how your avatar looks to reflect your BMI, so I’ve got a rotund Mii staring back at me. I was sure to thank my mother-in-law for getting us a Christmas present that tells me just how much of a fat ass I am.

The game encourages you to use it every day, but life happens and I don’t always get to it. Here’s our exchange from last night.

Wii Fit: Good evening mattw. Relaxing after a long day? (I know, I’m a dork and my online handle is the same as my Wii Fit identity.) I see you haven’t logged on for three days. You should really come back every day for the best results.

Me: Fuck you. I work two jobs and have a two-year-old. I’ve been a little busy.

Wii Fit: Would you like to hear a fitness tip?

Me: No, I don’t want to hear one of your lame tips. Could we just get to the exercising part please?

Wii Fit: *dejected* Ok…you know, if you want a tip, you can always ask later.

Wii Fit: Oh, ok, but if you change your-

Me: No. Let’s just get to the exercising. [commence approximately a half hour of exercising] 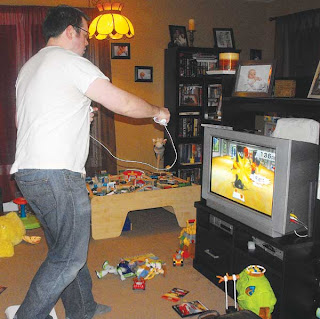 Me boxing. Doesn't that physique just scream graceful Adonis?
Wii Fit: Ok, let’s do your body test. Stand on the platform and relax…Oh, your center of balance is off.

Me: Oh, really? No surprise since it’s slightly to the right or left every time I’ve stood on you.

Wii Fit: You should work on your center of balance, blah, blah, blah…

Me: Yeah, thanks, whatever. I’m sure you’ll just tell me I gained it back tomorrow. You’re going back under the couch.

Wii Fit: No! Don’t put me under there, it’s dark and I think your kid’s fallen goldfish crackers are plotting against me.

* * *
Overall, so far I’ve lost about 5 lbs., but the stupid thing is quick to let you know when you’ve gained a little back, and if you somehow have a fluctuation of +2 lbs. since the last time you were on you have to tell it why. Then it reprimands you. Also, every time it gives me my BMI, the little cutesy computerized voice says “That’s obese!” Fucking machines.
Posted by mattw at 12:45 PM

Not really, but that living room reminds me of days gone by when I had two two-year-olds. Simultaneously.

In retrospect, I think that should have read "Doesn't that physique just make graceful Adonises scream?" :)

I've been playing Fit for a bit now, and once been stupid enough to try to do lunges. I couldn't walk for two days in vertical directions (up-stairs, down-stairs).

On the other hand, my supposed BMI went down a percent. The Fit gave me no kudos for it. Ungrateful basterd.

My aunt (who also has a Fit) tells me that the damn thing also "tells" on you when you haven't been exercising and another user logs on.

That was sufficient for me to decide I really didn't need one of these in my life.

Yeah, if someone hasn't been on in a while and you log on it'll say something like "I haven't seen _____ in a while. You should tell them to do a body test."

I used to think it sounded fun. Now, it sounds like the PE teacher from junior high that I loathed. Passive aggressive asshole. (the PE teacher and the Wii Fit, not you!)

Tania, It's really not that bad. It encourages more than it scolds. I just exaggerated for dramatic effect. :)

I am always suspicious of BMIs that are derived solely from height and weight. I weigh more than I look like I weigh. (When I got my last driver's license, the guy made me change it to a lower number.) I know that I've weighed almost the exactly the same for my entire adult life, but I'm much fitter and more muscular now than I was in high school. So I have the same BMI then as now? I think not.

The day you turn it on and the voice sounds like Ah-nold, you'd best hope your aerobic stamina has been improved by the software.

Wow! no updates since last Friday, that episode of Wii Fit must really have worn you out!

BMI is bullshit. It can be a guide, but, as Anne says, it's really not a reliable indicator of one's fitness level and size.

I was considering getting a Wii and Wii Fit sometime this year, once I move into my own apartment. Partially because I think it might be fun to do it with CuteFilmNerd. Now I'm not so sure. I don't like machines that talk back at me unless I've set it up to do so.

A little off topic, Guys... I have a question. A week ago I found this site:
[url=http://www.rivalspot.com]Rivalspot.com - Playstation tournaments[/url]
They say you can play online Fight Night game tournaments on any console for cash... had anyone tried that before? Looks like a cool idea...
Are there any other sites where you can play sports games for real moneys? I Googled and found only Bringit.com and Worldgaming.com but it looks these guys don't specialize in sport gamez. Any suggestions?